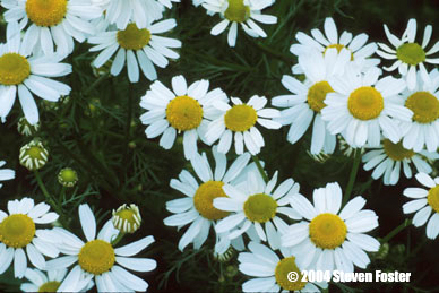 Chamomile (Matricaria recutita) is commonly used in human herbal medicine as a mild sedative, and as an antispasmodic to relieve menstrual cramps. Both of these effects are contributed by one of its constituents, apigenin, which is one of the more well studied active ingredients in plant medicine. Apigenin acts similarly to aspirin by inhibiting production of the chemical mediators of inflammation. It also dilates smooth muscle to relieve cramping abdominal pain and is a mild sedative and anxiolytic (anti-anxiety). Another active ingredient of chamomile is chamazulene, which also acts like aspirin to inhibit production of the chemical mediators of inflammation. 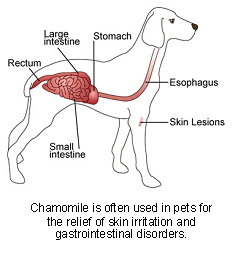 Because of these muscle-relaxing, anti-inflammatory and anti-spasmodic properties, chamomile may provide relief in a variety of common small animal disorders. It may be applied topically as a concentrated tea to relieve skin inflammation, in keeping with the results of a small double blind study in 1987 where chamomile reduced inflammation and accelerated healing of skin abrasions.

Chamomile can also be used as a sedative, especially where anxiety leads to gastrointestinal disorders such as gas, pain, and bloating. Chamomile has a reputed ability to soothe inflamed intestinal surfaces just as it does the skin, leading to its use to heal gastric ulcers. Indeed, one of the most common uses of chamomile in small animal medicine is to soothe and heal irritated intestines in inflammatory bowel disease.

Why recommend administration chamomile to my pet?

Chamomile is often administered orally to dogs and may be used topically in both dogs and cats. It is given orally to relieve anxiety and also to relieve inflammation in patients with inflammatory bowel disease (which can have many causes). It may be used alone or in combination with other western herbs such as mint, wild yam, liquorice, and ginger.

Topically, chamomile is blotted onto the skin as a concentrated tea to relieve inflammation. Relief of skin inflammation has been documented in laboratory animals when chamomile is used orally as a liquid extract.

How much experience is there with the use of chamomile in pets?

Mainly dogs and cats are treated with chamomile. Many pet owners use chamomile externally for mild skin irritations, while others use it to treat gastrointestinal inflammation.

How much research has been conducted on this supplement?

"...most of the evidence for its effectiveness comes from herbal tradition, laboratory studies and clinical experience."

While chamomile is in common use, most of the evidence for its effectiveness comes from herbal tradition, laboratory studies and clinical experience. Controlled trials with chamomile are lacking in both animals and humans.

How successful is chamomile? 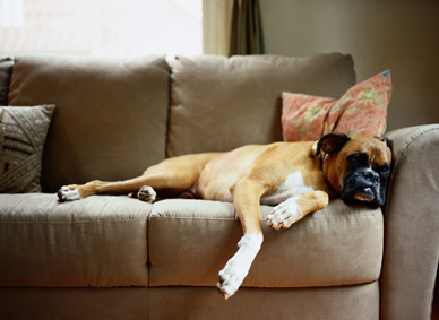 Chamomile is very successful as a topical therapy and is useful when combined with other herbs to assist in the healing of problems with the gastrointestinal tract.

How safe is chamomile?

Chamomile is very safe for both internal and external use.

"Patients allergic to plants in the Aster family may experience allergic reactions to chamomile..."

Patients allergic to plants in the Aster family may experience allergic reactions to chamomile, but the risk of this being a problem in dogs and cats is extremely low.

Where do I obtain chamomile and do I need a prescription?

Pet owners are cautioned against buying supplements without knowledge of the manufacturer, as supplements are not highly regulated and some supplements may not contain the labelled amount of ingredients. The strength of chamomile varies depending on the preparation, with liquid extracts always possessing more pharmacological strength than dried powders. Your veterinarian may have preferred supplements that he or she will recommend. A prescription is not needed for chamomile.

© Copyright 2009 Lifelearn Inc. Used and/or modified with permission under license.